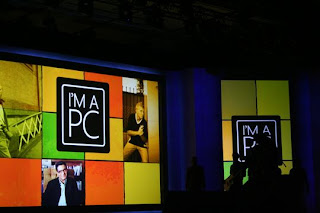 Transforming what Windows is
Windows : In the PC+In the Cloud and in The phone.

Windows7 with Charlotte Jones (group Product Manager) and the beta of Windows 7 Intuitive navigational, snap, jumplists with right click, there are different options for Windows Media Player, Word and other programs with the WIndows 7 taskbar.

Charlotte Jones is obnoxious.
Windows 7 is more friendly with several computers, WMP uses homegroup with an option called "Play to".

Touch enabled applications are in the DNA of windows 7
Windows mobile has flash built into.
The showed the Samsung Omnia with the dummy proof camera 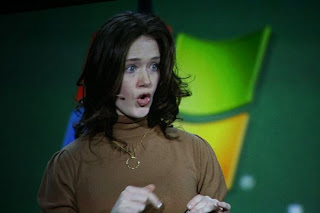 They are showing Internet Explorer 8 with accelerators and some Silverlight uses in the "What's new feed", Charlotte used "Quick Add", Windws live is connecting all this .
Some dynamic images fro windows messenger.
Tripod appeared on the stage before Robbie Bach singing for the Xbox.
Robbie Bach appeared on the stage announcing the new version of Sync for Ford
He was running trough subjects, the Zune part was quick and they mentioned the subscription service .
Xbox360, they have 17 million suscribers in Xbox live and 2008 was their best holiday.
Halo, its biggest franchise will get two games in 2009 Halo wars and halo 3 ODST
The NXE made gamers more social,
Xbox LIVE primetime to get specific times for events. (1 vs 100)
They made a a demo of the netflix integration for HD content (that one is not new) but its great anyway.
Metallica, AC/DC and others are using the rockband as a 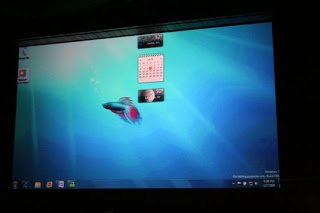 new way to get more fans .
Community games
Sparrow made a game that looks like an early spore level.
Social gaming
connected entertainment across three screens
The are showing smaller "surface" devices.
Semantic analysis used on the device to translate text into simulation.
Machine translation
They finally are showing new surface devices.
Ok, the crysis, IT industry has a great deal of oportunity.
written by Jorge I. Figueroa F. a las 20:52